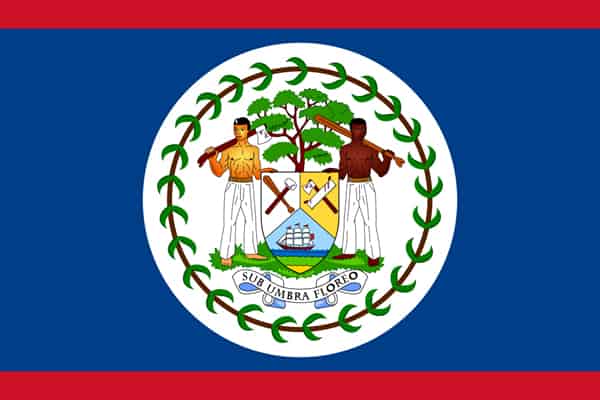 is a small, English-speaking nation on the coast of the Caribbean Sea, bordered in the north by Mexico and to the south and west by Guatemala. Formerly known as British Honduras it is approximately 8,866 square miles, and yet only has a population of just over 400,000. Once occupied by the great Maya civilization there are still many well preserved ruins set within jungle locations that make visiting this country all the more exciting. Over 60% of Belize’s land surface is covered by forest and 37% falls under some form of official protection. There is also 13.6% of Belize’s territorial waters, which contain the Belize Barrier Reef, a UNESCO-recognized World Heritage Site that is also protected. This Reef is about 300 kilometres (190 mi) long and is a globally important ecosystem that protects over 100 species of coral, 500 species of fish and hundreds of different invertebrates. The national flower of Belize is the Black Orchid, the national animal is the Baird’s Tapir and the national bird is the Keel-billed Toucan, but of course there is much, much more to see.

Hotspots & Wildlife:
Crooked Tree Wildlife Sanctuary: The Crooked Tree Wildlife Sanctuary was founded in 1984 by the Belize Audubon Society and is a 16,000 acre reserve comprising inland waterways, swamps and lagoons. Crooked Tree Village is one of the oldest inland villages in the country and this wonderful area is of  international importance, as It provides a good resting area for thousands of migrating birds. These birds flock to the lagoons during the wet-season where food is difficult to find in other areas. In 1998, this area was listed as Belize’s first Ramsar site, and is one of the country’s top wildlife hotspots. Excellent birdwatching can be found on both land and on the water and a pleasant way to explore the sanctuary is by boat where many of the water birds congregate along the lakeshore and river banks. Protecting critical habitats for both migratory and resident birds more than 300 species have been recorded here. Some of these include American Pygmy and Green-and-rufous Kingfisher, Sungrebe, Boat-billed Heron, Northern Jacana, Limpkin, Black-Collared Hawk, Snail Kite, the elusive Agami Heron, and endangered Yellow-headed Parrot. Of course there is plenty of other wildlife to see including Black Howler Monkeys, Spiny-tailed and Green Iguanas plus good numbers of dragonflies and butterflies.

Mountain Pine Ridge Reserve: The area known as Mountain Pine Ridge is a 300 sq. mile reserve that consists of mostly pine trees, broad-leaf forests, shrubs and grassland. The habitats also contain savannah, deep rocky ravines and an impressive set of waterfalls such as Big Rock Falls, Butterfly Falls and the 1,000 foot Hidden Valley Falls. There’s the Rio Frio cave through which the Rio Frio runs, which has the largest entrance of any cave in Belize. The climate here is subtropical with a rainy season that lasts from July to February. This unique upland ecosystem is home to wonderful species such as the Orange-breasted Falcon, Stygian Owl, Black-and-white Hawk Eagle and King Vulture as well as various large mammals, including Puma, Jaguar, Ocelot, White-nosed Coati and Baird’s Tapir. There is also a small population of Morelet’s Crocodiles. There many species of butterflies and the nearby Green Hills Butterfly Ranch with over 100-acre of grounds has recorded over 300 different kinds as well as a dozen species of hummingbirds, Hook-billed Kite, Gray-headed Kite, Grey-throated Chat, Rufous-capped Warbler, Hepatic Tanager and Green Jay. There is plenty of other fauna present in the reserve including the Maya Mountains Frog which is restricted only to the Maya Mountains.

Blue Hole National Park: Officially named St Herman’s Blue Hole National Park this 575-acre protected area is located along the Southern Highway near Belize’s capital city of Belmopan. It has two cave systems, the ‘Crystal’ and ‘St. Herman’s’ caves, along with jungle nature trails and a beautiful pool that gives rise to the park’s official name. A number of steps descend to a small spring, where cool, turquoise waters are surrounded by dense forest, overhung with lichens and mosses. With short hikes, stunning ancient Maya cave formations, a wonderful interpretive trail and refreshing pools where you can take a dip this is a great place to visit. The park is managed by the Belize Audubon Society and as such it is a hotspot to search for a variety of interesting birds. In fact over 200 species have been recorded including White Hawk, Spotted-Wood Quail, Crested Guan, Lovely Cotinga, Keel-billed Toucan, Red-legged Honeycreeper, Slaty-tailed Trogons, Slaty Antwren, Tody Motmot and Northern Nightingale-wren. Several of the mammals that occur include ocelot, jaguarundi and even the rarely seen Jaguar.