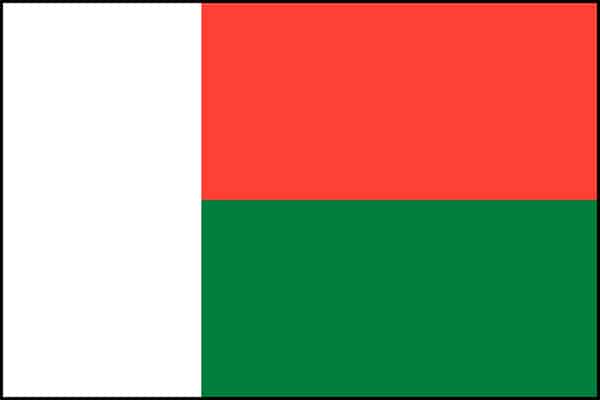 this huge island in the Indian Ocean is around 400km (250 miles) off the coast of East Africa, and at over 1600km from north to south is the fourth-largest island in the world. For the wildlife enthusiast this is a truly unique country with the island’s long isolation from neighbouring continents making it home to numerous strange and bizarre flora and fauna found nowhere else on Earth. In fact about 80% of its plants, 40% of its birds and virtually all of the mammals, reptiles and amphibians found here are endemic. Habitats have been decimated in Madagascar by the traditional technique of slash-and-burn agricultural practice, and as a result more than 90% of the original forests have been lost, leaving scattered pockets where unique flora and fauna are just about hanging on to survival. Many of these pockets are now national reserves and home to habitats such as dry deciduous forests, spiny forests, deserts and xeric shrublands. Amazingly 90% of the forest species are endemic including all 103 species and subspecies of Lemur, the mammal that has made Madagascar famous. There are in fact seven families of mammals, seven families of birds, and six families of plants that are unique to Madagascar as well as numerous reptiles and amphibians. An astonishing 120 bird species are endemic including vangas, ground rollers, cuckoo roller, couas, ascites, and mesites.

Andasibe-Mantadia National Park: Locally and more simply known as Perinet this highly important rainforest set in the east of the Island is most famous as the home of the largest and without doubt noisiest Lemur of all, the Indri. This protected area actually consists of the Anamalazaotra Special Reserve (Perinet) and the larger Mantadia National Park and covers roughly 155 square kilometres. As already mentioned the incredible Indri lives here but there are also another 10 species of Lemur including Diademed Sifaka, Black-and-white Ruffed Lemur and Eastern Grey Bamboo Lemur. As for the birds this is an incredible area with many endemics such Collared Nightjar, Madagascan Pygmy Kingfisher, Blue Vanga, Red-fronted and four species of Ground Roller: Pitta-like, Scaly, Rufous-headed and Short-legged, Madagascan Owl, Madagascan Grebe, Madagascan Flufftail, Frances’s Sparrowhawk and much more. Then there is Madagascar Tree Boa and a host of Chameleons such as Parson’s Chameleon and the Tiny Nose-horned Chameleon, Geckos including the incredible Satanic Leaf-tailed Gecko, and if that’s not enough then there are incredible insects, amphibians, and flowers which include over 100 species of orchid.

Berenty Reserve: Berenty Reserve, a private wildlife reserve in Southern Madagascar which opened to the public in 1981 and has since then gained international fame mainly for its confiding Ring-tailed Lemurs and ‘dancing’ Verreaux’s Sifakas. Protecting more than a 1000 hectares, its habitats which stretch along the Mandrare River include Tamarind gallery forest, drier open scrub, and the fascinating semi-arid “spiny forest”. In fact an incredible 92% of the plant life within this amazing forest is endemic. Berenty Reserve is also home to six species of lemur, which include Ring-tailed, Verreaux’s Sifaka, Red-fronted Brown Lemur, White-footed Sportive Lemur and the tiny Grey Mouse Lemur which is best seen on a night walk with a local guide. During the day it’s possible to see the largest roost in the Southern Madagascar of the Madagascar Fruit Bats, plus a great selection of Chameleons and a few reptiles. Over 100 species of birds have been reported in this reserve with many endemic or highly sought after by birdwatchers. Among the list of great birds are Giant and Crested Couas, Sickle-billed and White-headed Vanga, Madagascar Paradise Flycatcher, Torotoroka Scops Owl and White-browed Owl, Madagascar Nightjar, Madagascar Sandgrouse and Madagascar Cuckoo-Hawk.

Ranomafana National Park: At over 160 square miles, this globally important reserve was established in 1991 with the purpose of conserving and protecting a very unique biodiversity. Situated in the east this tropical rainforest has been subject to extensive scientific research, and no more so than after the discovery of the Golden Bamboo Lemur in 1986 by Dr. Patricia Wright. Ranomafana means ‘hot water’ in Malagasy and the park is justly famous with tourists for its natural hot springs. For the naturalist this place has such a huge diversity of flora and fauna it is simply incredible. There are 12 Lemur species that include the Golden Bamboo Lemur, Greater Bamboo Lemur, Eastern Grey Bamboo Lemur, Aye-aye, Eastern Woolly Lemur, Red-bellied Lemur, Brown Mouse Lemur, Greater Dwarf Lemur, Small-toothed Sportive Lemur, Black-and-white Ruffed Lemur and the Milne-Edwards Sifaka. Then there are 62 species of reptile, 130 species of frog, insects including the Comet Moth which is one of the largest moths in the world, endemic plants and trees, plus of course an amazing selection of special birds. Among the 160 plus birds recorded here area specialties such as Brown Mesite, Yellow-bellied Sunbird Asity, Pitta-like and Rufous-headed Ground Rollers, Madagascan Flufftail, Velvet Asity, and a whole host of flycatchers, Vangas and Couas.