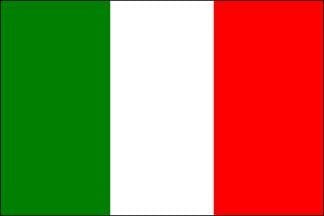 is the long boot-like shape of Italy sits in south-central Europe, extending from the Alps in the north through the Apennine Mountains which form the backbone of the peninsula and extend 1,350 km, to the lowlands and even two of the Mediterranean’s biggest islands Sicily and Sardinia. Sicily also has one of the worlds most active volcanoes, Mount Etna.  Nearly 40% of Italy is mountainous with its highest peak being Mont Blanc, at 4,810 meters (15,780 ft) and due to a great variety of ecosystems, Italy is home to more than one third of Europe’s fauna. Around 100 species of mammal include many that are rare and localised such as Eurasian Wolf, Marsican Brown Bear, Apennine Chamois, Alpine Ibex, Crested Porcupine, Alpine Marmot and Snow Vole. Over 500 species of birds can be found along with huge numbers of butterflies, flowers, and even rare reptiles and amphibians like the Spectacled Salamander. The rocky coast-line supports one of the rarest gulls in the world, the beautiful Audouin’s Gull and the seas also hold the incredibly rare Mediterranean Monk Seal with an estimated population of fewer than 700 individuals.

Hotspots & Wildlife:
Po Delta: The Po River Delta sits on the largest plain in Italy, covering some 46,000 km2 (18,000 sq mi), and is a magnificent reserve where wildlife and people live side-by-side. It represents over 70% of the total plain area in the whole country and is fed by Italy’s longest river ‘The Po’  at 652 km long. This huge wetland with its numerous ponds, streams, reed beds, coastal dunes and flooded meadows works in combination with the excellent local agriculture. Many of the stunning variety of plants and animals that live here including more than 300 species of birds can be seen by taking motor boats or small boats from fishing villages along tributaries and the main river. A colony of over 10,000 Greater Flamingo’s live alongside countless herons, ducks, egrets, terns, avocets, stilts and numerous reed-bed birds. The Pygmy Cormorant can be found as well as both Slender-billed and Mediterranean Gulls, European Pond Turtle, huge Caspian Terns, Crested and Smooth Newts which are both common, and if searching the surrounding tracks of pine forest you can find numerous species of orchids and flowers.

Abruzzo National Park: Founded in 1922, the majority of the park is located in the Abruzzo region, with smaller parts in Lazio and Molise, the park headquarters are in the pretty hilltop village of Pescasseroli. At 496.80 km2 this beautiful park with stunning scenery is mostly mountainous with wooded valleys and rivers and predominantly mature Beech forests. Although the park is teeming with many flowers including numerous orchids, it is also home to many reptiles, amphibians and butterflies. But most of all it is the mammals that make this place so special. The Marsican Brown Bear which is the rarest subspecies of the Eurasian Brown Bear and endemic to central Italy and particularly Abruzzo National Park where there are probably no more than 50 individuals. The Italian Wolf, also known as the Apennine Wolf, is a subspecies of the Grey Wolf and has a good population here, while other mammals include Pine Marten and Beech Marten, European Polecat, Eurasian Badger, Eurasian Otter and Apennine Chamois an Italian endemic subspecies. There are of course many birds species in this mountainous habitat including majestic Golden Eagles, Rock Partridge, the rare White-backed Woodpecker, Red-billed and Alpine Chough, Barn Owls, Little Owls, Wryneck, Goshawk, Buzzards and up on the peaks the delightful White-winged Snowfinch. With interesting reptiles such as Asp Viper and good numbers of Amphibians this is a wonderful place to visit.

Gran Paradiso National Park: Situated in the Graian Alps between the Aosta Valley and Piedmont this wonderful national park was named after Gran Paradiso mountain which sits partly in Italy and partly in France’s Vanoise National Park. Encompassing over 700 square kilometres (173,715 acres) of alpine habitat that includes pastures, rocky mountains and glaciers the park was initially created to protect the Alpine Ibex from poachers. The Alpine Ibex is the symbol of this Park and can now be found throughout. At higher altitudes the trees gradually thin out and there are alpine pastures rich in flowers and during the summer months many species of butterflies including Apollos and Peak Whites. These highlands are also home to Mountain Hare and Rock Ptarmigan plus the magnificent Golden Eagle and Lammergeier. Chamois, Marmot, Alpine Accentor, Rock Thrush, Rock Partridge, Eurasian Eagle Owl and the amazing Wallcreeper inhabit rock faces and gorges and lower down Beech and Aspen forest support the huge Black Woodpecker, plus Spotted Nutcracker, Hazel Grouse, Sparrowhawk, and Goshawk. Even lower down Dipper frequent the streams Beech Martens, Stone Martens, Foxes, Tawny Owl Black Grouse and many other warblers, flycatchers and thrushes along with reptiles,  amphibians, newts, salamanders and insects.