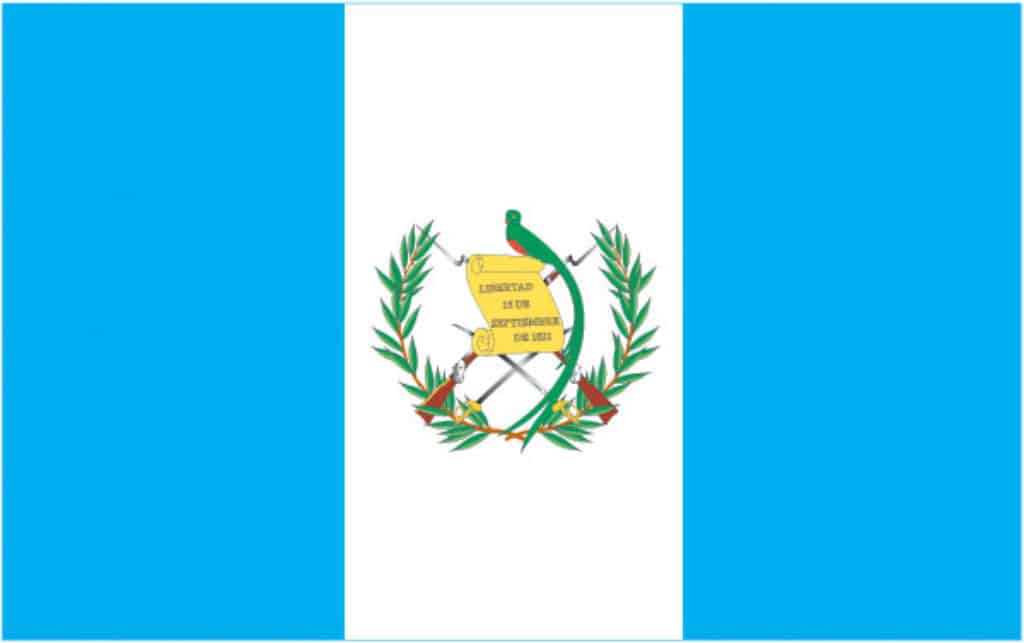 is a country in Central America bordered by Mexico to the north and west, Belize and the Caribbean to the northeast, Honduras to the east, El Salvador to the southeast and the Pacific Ocean to the south. With an estimated population of around 16.6 million, it is the most populated country in Central America. It is mountainous with small patches of desert and sand dunes, all hilly valleys, except for the south coast and the vast northern lowlands. Two mountain chains enter Guatemala from west to east, dividing Guatemala into three major regions: the highlands, where the mountains are located; the Pacific coast, south of the mountains and the Petén region, north of the mountains. Guatemala has 252 listed wetlands, including five lakes, 61 lagoons, 100 rivers, and four swamps. Tikal National Park was the first mixed UNESCO World Heritage Site. Guatemala is a country of distinct fauna. It has some 1246 known species. Of these, 6.7% are endemic and 8.1% are threatened, making Guatemala a top destination for wildlife lovers.

Los Tarrales Reserve: Is located on the southern slope of Atitlan Volcano, Los Tarrales reserve covers an area between 760m and 2,500m, changing gradually from Rainforests in the lowlands to cloud forests in the higher altitudes. Los Tarrales is a birding paradise, more than 350 species of birds have been recorded in this private area, which preserves primary and cloud forest. The reserve has also been given IBA (Important Bird Area) status by Birdlife International. The forest is accessible through a network of trails. Los Tarrales is a great place to see Birds restricted in Guatemala to the Pacific slope, such as Long-tailed Manakin, Pacific Parakeet, White-bellied Chachalaca, Blue-tailed Hummingbird and the rare Azure-rumped Tanager. Together with neighbouring private reserves, Los Tarrales protects the forest on the southern slope of Lake Atitlan, the area is great for seeing large raptors like Black Hawk-eagle, Ornate Hawk-eagle and King Vulture. Los Tarrales offers a great 10 room Lodge, all with private bathrooms and fantastic homemade meals if you’re staying the night.

Tikal National Park: Is the ruin of an ancient city, which was likely to have been called Yax Mutal, found in a rainforest in Guatemala. It is one of the largest archaeological sites and urban centres of the pre-Columbian Maya civilization. It’s located in the archaeological region of the Petén Basin in what is now northern Guatemala. Situated in the department of El Petén, the site is part of Guatemala’s Tikal National Park and in 1979 it was declared a UNESCO World Heritage Site. Tikal gets thousands upon thousands of visitors every year but is still one of the top wildlife hotspots in the country. Around 400 species of bird have been recorded in the park, one of the main attractions is the pair of breeding Orange-breasted Falcons that can be often seen perched on top of the temples. Other notable species are the Ocellated Turkey, Grey-throated Chat, Black Catbird and Rose-throated Tanager. Man Mammals have also been seen in the park including 3 species of cat, the Jaguar, Ocelot and Jaguarundi. For many visitors seeing the large troops of White-nosed Coati’s that roam around the trials of the park is a real highlight. There are many species of reptile in the park including the Fer-de-lance and the Morelet’s Crocodile but these are very rarely encountered.

San Pedro Volcano: On the shores of Lake Atitlan, Central America’s deepest lake, lies San Pedro Volcano. Located in the Western Highlands of Guatemala, It is ringed by small towns, many of which are favourites among backpackers and at 3,020m (9,908ft) it one of the largest Volcanos in Guatemala. San Pedro is famed amongst bird watchers for being the home of the Horned Guan, a gruelling hike up the Volcano is well worth it to see one of Central America’s rarest birds. Usually the hike to the top of the Volcano takes 3 hours, but there are many birds you can see on the way up to keep you entertained, like the Garnet-throated Hummingbird, Fulvous Owl and Singing Quail. At the foot of the volcano you can often see the Belted Flycatcher in the dry scrub habitat, another very rare bird in the country. The surrounding areas around the lake are good for a range of different species, the highlights being the Resplendent Quetzal, Azure-rumped Tanager, Slender Sheartail and Sparkling-tailed Woodstar. At the bottom of the Volcano lies the small town of San Pedro, here there are a range of different hotels and small local markets.