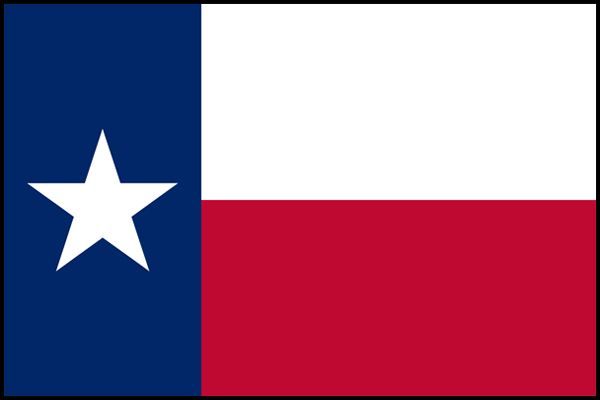 is the second largest state in the U.S. by area (after Alaska) it is around 268,820 square miles (696,200 square kilometres) and is one of the southern states that borders Mexico. It got itself nicknamed the “Lone Star State” for its former status as an independent republic. It is one of the richest birding areas in the United States recording over 600 different species. There is a wide range of other animals and insects that live here including 65 species of mammals and over 200 species of reptiles and amphibians. This great diversity is due to the wide variety of habitats that range from coastal swamps and pine woods, to rolling plains and rugged hills, and finally the dry desert and mountains. On the coast is the globally important Bolivar Flats Shorebird Sanctuary, a complex of mudflats, salt marsh, uplands and beach, which provides resting, feeding and breeding sites for hundreds of thousands of birds each year. In the south the Rio Grande forms a natural border with the Mexican and is a favoured place for rarities coming across from Mexico during the spring or winter months. Other restricted and important species include wintering Whooping Cranes, both Black-capped Vireo and Golden-cheeked Warbler on the Edwards Plateau and also Colima Warbler and Lucifer Hummingbird in the far west.

Hotspots & Wildlife:
Lower Rio Grande Valley: The Rio Grande Valley is not a true valley, but a floodplain, and although bordered by the river itself, it also includes a wide range of habitats from coastal wetlands to riverine woodland and semi-desert. Just a stone’s throw from Mexico this area has long been famous among birdwatchers for the number of ‘Mexican’ specialities and rarities that turn up. A number of state parks and preserves can hold over wintering rarities often attracted to feeders put out by RV owners in campsites. Only 5% of the native riparian, floodplain, and wetland habitats remain, but because of the diversity of these habitats it has recorded nearly 500 bird species, 300 species of butterflies, 1,200 species of native plants and numerous reptiles, amphibians and dragonflies. Birdwatchers travel from far and wide in search of the specialities that include Green Jay, Plain Chachalaca, Green Parakeet, Red-crowned Parrot, Black-crested Titmouse, Long-billed Thrasher, Gray Hawk, Ringed and Green Kingfishers, Clay-colored Robin, Buff-bellied Hummingbird, and both Audubon’s and Altamira Orioles. The wonderful South Padre Island, attracts countless migrants during the spring migration, and other sought after species that can be found nearby including Aplomado Falcon, Tamaulipas Crow and Botteri’s Sparrow. There are plenty of exciting reptiles and even Jaguarundi and Ocelot if you are lucky.

High Island: This is without doubt one of the US’s biggest bird migration hotspots with countless thousands of songbirds passing through every spring and autumn (fall), on their way to and from North America. Located on the edge of the Gulf of Mexico, in the Bolivar Peninsula, Galveston County, it is just under two hours drive from Houston International Airport. If combined with visits to nearby Laguna Atascosa National Wildlife Refuge and Bolivar flats for wetland and shorebirds the list of potential species is incredible. In spring concentrated and high numbers of species of migratory birds make landfall after the exhausting crossing over the Gulf of Mexico. The Houston Audubon Society has 4 sanctuaries at High Island: Boy Scout Woods, Smith Oaks, Eubanks Woods, and the S.E. Gast Red Bay Sanctuary. The most famous are Boy Scout Woods and Smith Oaks where the number and variety of migrant land birds sometimes has to be seen to be believed. Here, thrushes, vireos, tanagers, orioles, grosbeaks, buntings and sparrows compete for one’s attention. And then there are the dazzling array of American wood-warblers, all in their stunning breeding plumage. It’s often quite easy to see between 20 – 30 species in one day depending on favourable weather conditions.

Edwards Plateau: The Edwards Plateau is a geographic region at the crossroads of Central, South, and West Texas, with the southeast portion of the plateau often referred to as the Texas Hill Country. The geography consists primarily of limestone, with elevations ranging between 100 and 3000 ft, and supporting numerous caves including the Rio Frio Bat Cave at Concan where up to 12 million Mexican Free-tailed Bats can be seen exiting at dusk. The scenery on the plateau is surprisingly lush with green forests, and crystal clear rivers and streams supporting a wealth of flowers, dragonflies and butterflies. For the birder the main avian targets are the Black-capped Vireo and Golden-cheeked Warbler, both of which are classified as threatened, with very restricted breeding ranges making this the best place to see them in the whole country. There are of course other ornithological attractions including colony’s of Cave Swallows, the localized Gray Vireo, spectacular Scissor-tailed Flycatchers, and stunning Painted Buntings and Vermilion Flycatchers. Cedar trees hold breeding Yellow-throated Warblers, Northern Parulas and Summer Tanagers, while a selection of mammals in the area include the occasional sighting of Black Bear and Mountain Lion as well as Javelina, Ringtail, Bobcat, Armadillo, Raccoon, Opossum and Badger.