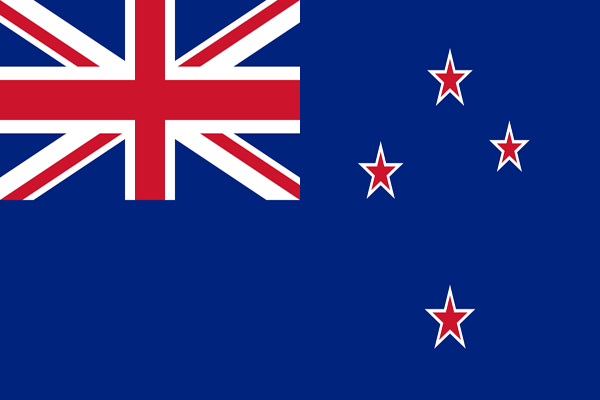 1,000 miles (1,600 km) southeast of Australia and made up of two main islands and over 700 smaller islands New Zealand sits in the South Pacific Ocean, the southwestern most part of Polynesia. It is about 1,000 miles (1,600 km) long (north-south) and about 280 miles (450 km) across at its widest point. The South Island is the largest landmass of New Zealand and is divided along its length by the Southern Alps, while the North Island is less mountainous but has several very active volcanoes. New Zealand’s geographic isolation for 80 million years has left it with deep glacier lakes, verdant valleys, dazzling fjords, long sandy beaches, and spectacular snow-capped peaks which include over 8 peaks at over 3,000 metres high, with the highest of being Mount Cook at 3,724 metres (12,218 ft). About 82% of New Zealand’s indigenous vascular plants are endemic, and the forests support a wide variety of birds that include several flightless species as there were previously no mammalian predators wanting them. The most famous of these flightless birds is the Kiwi, the national symbol of New Zealand. Marine mammals are abundant, with almost half the world’s cetaceans reported in surrounding waters. There are also more penguin species found here than in any other country. The introduction of many mammal species by humans have seriously impacted the New Zealand fauna, driving many species to extinction. In recent years, successful efforts have been made to remove possums, rats, ferrets, and others from many large and small offshore islands in an effort to return these places to something more closely resembling their original state.

Hotspots & Wildlife:
Kaikoura: Situated on the east coast of the South Island this small town is known as one of the wildlife capitals of New Zealand. Back dropped by the Southern Alps that rise straight from the ocean this incredibly scenic spot has become a very popular tourist destination, mainly for whale watching because of its healthy year round resident population of Sperm Whales. Whale watching started in the late 1980’s and now attracts over 550,000 tourists per year. The deep-water canyon system known as the Hikurangi Trench rich in nutrients produces upwelling currents that attract an abundance of marine life. Other whale species can be seen such as Orca from December to March and Humpback Whales visit in June and July. Kaikoura is also a playground for New Zealand Fur Seals and dolphins that include the ever-present Dusky Dolphin as well as the endemic Hector’s Dolphin. For the birdwatcher this is seabird heaven, with some of the very best viewing of pelagic birds in the world. About 40 species of seabirds can be found in the coastal waters of Kaikoura. A few such as Hutton’s Shearwaters nest in the mountains and number in the region of 300,000. Several companies run pelagic boat trips in search of seabirds and the great thing is you do not have to go very far to encounter numerous albatross, petrels, and shearwaters.

Tiritiri Matangi Island: This small island reached by ferry from Gulf Harbour on the Whangaparaoa Peninsula is a wildlife sanctuary and one of New Zealand’s most important and exciting conservation projects. It takes just 20-minutes or a longer 75-minute journey from the Downtown Auckland ferry terminal. The 2.2 km sq (1 sq mi) island is an open nature reserve managed by the Supporters of Tiritiri Matangi Incorporated, under the supervision of the Department of Conservation (DOC) and renowned as one of the most exciting and successful conservation projects in New Zealand. From the moment you step ashore you know you are somewhere special. Between 1984 and 1994, volunteers planted between 250,000 and 300,000 trees and now the Island is 60% forested with the remaining 40% left as grassland for species preferring open habitat. It is predator-free which means ground nesting birds such as Blue Penguins, Little Spotted Kiwi the impressive Takahe are safe and protected. Accommodation is available in the island’s bunkhouse, and there is also a visitor centre and gift shop nearby. Up to 71 species of birds can be observed on or near the island and apart from those previously mentioned there is also Spotless Crake, North Island Kokako, North Island Saddleback, Stitchbird, Red-crowned Parakeet, New Zealand Fernbird and Morepork, as well as Tuatara lizard and Giant Weta a huge endemic grasshopper.

Ulva Island: The small island of Ulva, just a 10 minute boat ride from Golden Bay, Stewart Island, covers 267 hectares (660 acres) of pristine forest. Since the eradication of rats it became predator free and an icon of success for New Zealand. The Ulva Island Charitable Trust, helped by the Department of Conservation have created a haven for rare and endangered flora and fauna. A self guided trail around this small island on beautifully managed trails allows the visitor to see a variety of birds such as South Island Saddleback, Yellowhead, Rifleman, Pipipi, Stewart Island Robin, Red and Yellow-crowned Parakeet, New Zealand Kaka, tame Wekas and with a lot of luck maybe a Stewart Island Brown Kiwi, but note these are generally nocturnal. As you are not allowed on the island at night it is easier to see the Kiwi on Stewart Island, where all the accommodation is as well. It is vital to respect the wildlife on Ulva by keeping to the trails and not harassing any creature you find. Most of the island is covered with pristine native, mixed hardwood-podocarp forest. Among the Podocarp trees are the majestic rimu, miro and totara, while on the ground are several orchids, southern rata, kamahi, tree ferns, delicate ground ferns and mosses.

For accommodations and lodges throughout New Zealand – Click here>

Any cookies that may not be particularly necessary for the website to function and is used specifically to collect user personal data via analytics, ads, other embedded contents are termed as non-necessary cookies. It is mandatory to procure user consent prior to running these cookies on your website.

SAVE & ACCEPT
Back to
Login
×