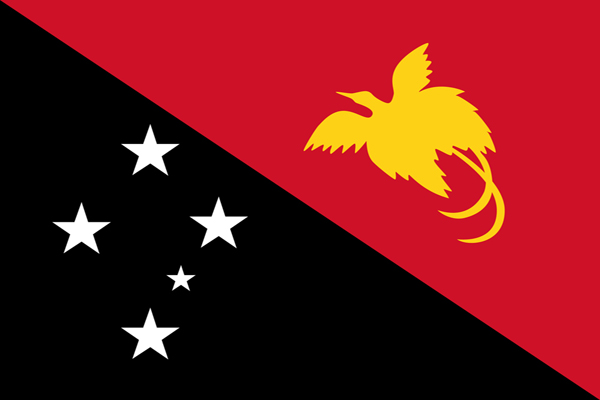 is an island country that lies in the south-western Pacific and includes the eastern half of New Guinea as well as many small offshore islands. At 462,840 sq km (178,704 sq mi), it is the world’s 3rd largest island country yet only has an estimated 8.95 million inhabitants. There are hundreds of indigenous ethnic groups with over 820 languages most of which have fewer than 1,000 speakers. The country’s geography is diverse and in places extremely rugged with a mountain ridge running the length of the island with the highest peak Mount Wilhelm at 4,509 metres (14,793 ft). Dense rainforests cover much of the island and there are also large areas of wetland surrounding areas of the Sepik and Fly rivers. The infrastructure and transportation can be difficult and many areas are only accessible on foot, by boat or by aeroplane. Many species of birds and mammals found in New Guinea have close links with species found in Australia, including marsupials such as some kangaroos and possums. The smaller offshore islands are also notable for their own distinct flora and fauna, again quite different from Australia and mainland New Guinea. Sir David Attenborough really put Papua New Guinea on the map for travelling naturalists and birdwatchers with his incredible TV programmes featuring the most outlandish and stunningly beautiful Birds-of-paradise.

Hotspots & Wildlife:
Varirata National Park: Less than an hour’s drive from Port Moresby is Varirata National Park. Papua New Guinea’s first national park, it was officially opened in 1973, and covers 1000 hectares rising to over 800m high. Travelling east from Port Moresby along the Sogeri Road this natural rain-forest park offers a rich variety of ecosystems and landscapes, from beautiful forests to savannah grasslands and secondary regrowth. This remarkable park is one of the easiest and best places in the country to discover a rich biodiversity which includes over 231 species of birds. Some of the most iconic species, the birds of paradise live in the park, with five out of the thirty-five species in PNG present. Without doubt the star of the show is the Country’s National Emblem, the Raggiana Bird-of-paradise. Between April and October, during peak breeding season, there is an excellent chance of seeing the stunning males in full breeding plumage dancing to attract a female. And what makes it even better is that some of the display trees are just off the road so easy to get to. As well as the Raggiana there are also other superb birds to be sought including Pheasant Pigeon, Chestnut-backed Jewel-babbler, Barred Owlet-nightjar, Rufous-bellied Kookaburra, Yellow-billed Kingfisher, Brown-headed Paradise-Kingfisher, Eclectus Parrot and Painted Quail-thrush.

Tari: Situated in the Central Highlands, this is home of the Huli people, a proud tribal group who still live largely as their ancestors did. Probably one of the most recognisable cultures is the Huli Wigmen who adorn themselves with brightly painted faces and incredible headdresses made from feathers from various Birds-of-paradise. There are 13 of Birds-of-Paradise, that live up in the Tari Gap and valleys spanning Ambua to Makara and Lakwanda. Many of these spectacular birds are wary and often difficult to view, but local Huli guides know where to find them often at display grounds. Some of the most sought after are the King of Saxony Bird-of-paradise, Blue Bird-of-paradise, Ribbon-tailed Astrapia, Princess Stephanie’s Astrapia, Black and Brown Sicklebill, Lawes’s Parotia and Short-tailed Paradigalla. Of course the surrounding area is superb for many other species of birds including Loria’s Satinbird, Lesser Melampitta, Wattled Ploughbill, Papuan King Parrot, Australasian Grass and Greater Sooty Owls, New Guinea Logrunner, Feline Owlet Nightjar, Papuan Whipbird, Spotted Jewel Babbler, Garnet and Grey-headed Robins, Spotted Berrypecker, Crested Berrypeckers, Black-breasted Boatbill, Mottled Berryhunter and Blue-capped Ifrita. With luck you can also find Dwarf Cassowary, Mountain Firetail, Buff-tailed Sicklebill, Papuan Eagle, Chestnut and Forbes’s Forest Rails, as well as other creatures such as Striped Possum, Coppery Ringtail and Long-fingered Triok, Hercules Moth and many species of orchid.

New Britain: New Britain is the largest island in the Bismarck Archipelago, part of the Islands of Papua New Guinea. It is roughly the size of Taiwan and consists of two ecoregions, the New Britain & New Ireland lowland rain forests which extend from sea level to 1000 meters elevation, and the New Britain & New Ireland montane rain forests which cover the mountains of New Britain above 1000 meters elevation. This crescent-shaped island, approximately 520 km (320 mi) long and from 29 to 146 km (18–91 miles) wide, has habitats that range from rainforests, rugged mountains and imposing volcanoes, to coastal areas bordered by some of the best coral reefs in the world which hold over 900 species of fish. Much of the tropical forests of New Britain have been rapidly destroyed in recent years, largely to the clearing of land for oil palm plantations. The areas that remain are still rich in wildlife especially birds which include many island endemics and other specialities such as New Britain Boobook, Blue-eyed Cockatoo, Blyth’s Hornbill, Red-knobbed Imperial Pigeon, New Britain Bronzewing, Pink-legged Rail, Black Honey Buzzard, Slaty-mantled Goshawk, New Britain Sparrowhawk, Black-capped Paradise Kingfisher, New Britain Dwarf Kingfisher, White-mantled Kingfisher, Red-breasted Pygmy Parrot, Bismarck Pitta, Melanesian Megapode and the newly discovered Golden Masked Owl.

For accommodations and lodges throughout Papua New Guinea – Click here>