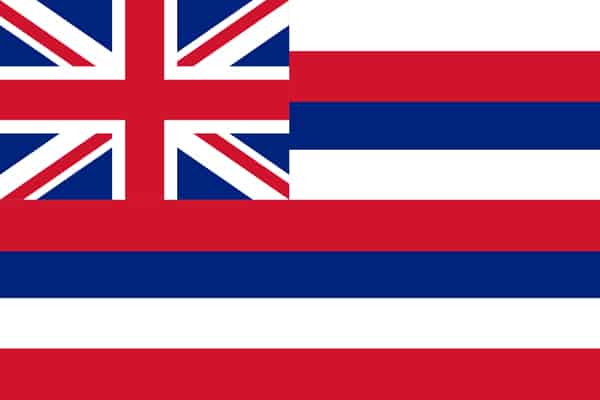 is located in the Pacific Ocean and around 4,000 kilometres from California the Hawaiian archipelago is the only island state in the United States. Composed of 137 volcanic islands and spanning 1,500 miles (2,400 km), there are eight main Hawaiian islands, seven of which are inhabited and only six of them open to tourists and locals. The eight main islands are Niihau, Kauai, Oahu, Molokai, Lānai, Kaho’olawe, Maui, and Hawaii. The last of these from which the state is named is also known as “Big Island” or “Hawaii Island”. There are six active volcanoes on the Islands with 4 on Hawai’i and 2 on Maui. Hawaii’s, most consistently active Kilauea volcano has been pouring rivers of molten lava into the ocean at Kapoho Bay. Hawaii has more endangered species and has lost a higher percentage of its endemic species than any other U.S. state. Currently there around 60 species of endemic birds and 60 species of introduced birds, with a total of 350 species being recorded. There are only two mammals native to the islands, one is the Hawaiian Monk Seal, the state mammal of Hawaii, and the other is the Hawaiian Hoary Bat. All other land mammal species here have been introduced. Aside from the endemic species other spectacular birds include the Nene, Laysan Albatross, White and Grey-backed Terns, Red-footed Booby, Hawaiian Petrel and Newell’s Shearwater.

Hotspots & Wildlife:
Kauai: Nicknamed the ‘Garden Island’ because of its tropical green forests that cover much of this island. This lush green habitat does not come at a cost and Kauai is known as one of the wettest places on earth with an annual average rainfall of 460 inches (38.3 ft; 11.7 m). This high annual rainfall has created deep valleys throughout the central mountains, carving out rugged canyons with many spectacular waterfalls. It is the fourth-largest island of the Hawaiian archipelago and has been featured in more than seventy Hollywood movies and television shows. The forested mountains play host to a good number of endemic birds including Kauai Elepaio, Kauai Amakihi, Puaiohi, Anianiau, Akekee, and Akikiki. One of the best places in the Hawaiian Islands for seabirds is the Kilauea Point National Wildlife Refuge where a huge colony of Red-footed Boobies can be found as well as Laysan Albatross. Looking out over the sea it is also possible to see Wedge-tailed Shearwaters, Brown Boobies, Great Frigatebirds and both White-tailed and Red-tailed Tropicbirds. Hawaii’s state bird the Nene (Hawaiian Goose) which was brought back from the brink of extinction can also be found here, while areas of wetlands such as the Hanalei valley supports endangered water birds such as Hawaiian Duck, Hawaiian Coot, and the endemic subspecies of Black-necked Stilt and Common Gallinule.

Oahu: This is the third-largest of the Hawaiian Islands and home to around one million people and the state capital city of Honolulu. It is 44 miles (71 km) long and 30 miles (48 km) across and you do not have to leave the city to be introduced to your first Hawaiian birds. The town parks such as Queen Kapiolani Park have nesting White Terns, while a Pacific Golden Plover strut around the grass verges. Nearby forests hold the endemic Oahu Amakihi, as well as Oahu Elepaio and several introduced species such as White-rumped Shama, Red-billed Leiothrix, and Red-whiskered Bulbul. The Northern shore of the island is the place to look for the rare Bristle-thighed Curlew, plus Wandering Tattler, and Hawaiian Coot, while sea-watching along the coast is likely to turn up both Red-footed and Brown Boobies, Sooty Tern, Wedge-tailed Shearwater and, if you very lucky maybe a Christmas Shearwater or rare Hawaiian Monk Seal. There are almost no land mammals to see but in the oceans Humpback Whales are fairly regular and other less common species include Pilot, Sperm, False Killer, Melon-headed, Pygmy Killer, and Blainville’s Beaked Whale. Hawaiian Monk Seals may also be spotted and with a lot of luck the magnificent and harmless Whale Shark. If you like snorkelling or diving then up to 680 different varieties can be found.

Big Island: Hawaii Island is also known as the ‘Big Island’ and got this name because it is the largest island of the United States with a total area of 4,029 square miles (10,433 square kilometres). The Big Island is home to the largest volcano in the world, Mauna Loa which rises 2.5 miles above sea level. One of the birding hotspots of this island is the Hakalau Forest Reserve, home to many of Hawaii’s endangered plants and endemic birds. Here it is possible to see Akepa, Akiapolaau, Hawaiian Hawk, Omao, Iiwi, Hawaii Amakihi, Apapane, Hawaii Elepaio and the critically endangered Palila. Of course these are all backed up by a good variety of introduced species. Another highlight of staying on this island is to take a pelagic birding trip from Honokohau Harbour. This area of ocean is rich in nutrients and attracts such species as Black and Brown Noddies, Sooty Tern, Wedge-tailed and Sooty Shearwaters, and Bulwer’s Petrel. Other less expected species can include Masked Booby, Hawaiian, Black-winged, Mottled, White-necked and Juan Fernandez Petrels, Band-rumped Storm Petrel, Newell’s and Christmas Shearwaters, plus three species of jaeger, South Polar Skua, and a array of interesting cetaceans.