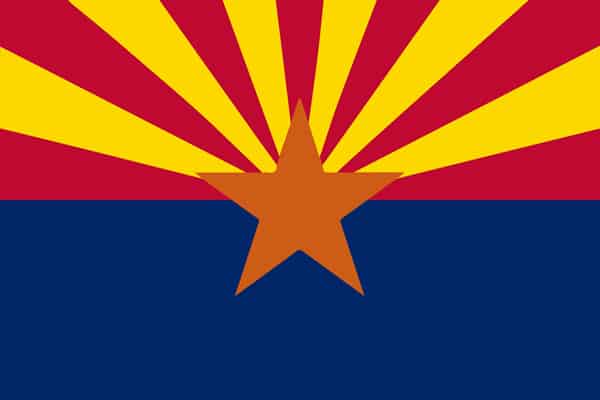 is the 6th largest state in the US at 113,998 square miles (295,000 km2), geographically situated in the southwest it is best known for the Grand Canyon, the mile-deep, steep-sided gorge, carved out by the Colorado River. As one of the Seven Natural Wonders of the World it is largely contained in the Grand Canyon National Park, one of Arizona’s three national parks that also include Saguaro National Park, and the Petrified Forest National Park. Habitats include desert, oak woodland, high-elevation conifer forest, and riparian areas. There are four distinct deserts – the Sonoran, Mohave, Chihuahuan, and Great Basin desert, and the low cactus studded flats of the Sonoran Desert, to the highest alpine peaks, the diversity of Arizona wildlife is incredible, making it one of the most visited US states by naturalists. Desert animals and reptiles include several very special ones such as Gila Monster, Chuckwalla, Bighorn Sheep and Western Diamondback Rattlesnake. Others include Coyote, Javelina, Black Bear, Desert Cottontail, Antelope Jackrabbit, Pronghorn and Mountain Lion. The list of special bird species is long around 550 with many highlights such as Montezuma Quail, Gray Hawk, Violet-crowned Hummingbird, Elegant Trogon, Arizona Woodpecker, Northern Beardless-Tyrannulet, Buff-breasted Flycatcher, Olive Warbler, Rufous-winged Sparrow, and Yellow-eyed Junco.

Hotspots & Wildlife:
Sonora Desert: This huge desert covers large parts of the Southwestern United States in Arizona, California and North-western Mexico and contains a huge variety of unique and endemic plants and animals. In all it covers an area of 260,000 square kilometres (100,000 sq mi), and has recorded over 350 species of bird, 60 mammals, 20 amphibian species, over 100 reptile species, and more than 2,000 native plants including the famous Saguaro Cactus. Founded in 1952 the Sonoran Desert Museum is a 98-acre is one of the most visited attractions in Southern Arizona, and an excellent place for anyone interested in the flora and fauna of this desert. The museum contains a zoo, aquarium, botanical garden, natural history museum, and is located just west of Tucson. Its two miles (3.2 km) of walking paths and trails take you through 21 acres (8.5 ha) of desert landscape which is home to a fabulous assortment of wildlife with more than 230 animal species and 1,200 varieties of plants. The museum is open every day and due to its bi-seasonal rainfall, this desert region is known as the “lushest desert on earth”. With plenty of species of natural plants and rocky habitat its possible to find a good variety of creatures such as Desert Tortoise and Collared Lizard plus birds such as Cactus Wren, Curve-billed Thrasher, Pyrrhuloxia, Phainopepla, Gila Woodpecker, Verdin and on flowering plants Costa’s, Anna’s and Black-chinned Hummingbirds.

Grand Canyon National Park: The Grand Canyon National Park, at a mile (1.6 km) deep, and up to 18 miles (29 km) wide encompasses some 277 miles (446 km) of the Colorado River and adjacent uplands. With its millions of years of geological history, layered bands of red rock and impressive viewpoints it is without doubt one of the most awe-inspiring natural tourist attractions in the world. Arizona, is home to much of the immense Grand Canyon, and it has a high diversity of wildlife, much of which is found in very remote and seldom visited areas. Over 90 species of mammals call this home and if you are lucky you could find Desert Bighorn Sheep, Mule Deer, Coyotes and Gray Fox, but you would be very fortunate to see Mountain Lion or some of the Bison that are only found on the North Rim of the Canyon. There are an amazing 22 species of bats making one of the highest bat diversities anywhere in the United States. Reptiles include Chuckwalla Lizard, Short-Horned Lizard and Grand Canyon Rattlesnake, and there are 12 species of endemic plants that only grow in the park. Among the 360 species of birds the most famous is the California Condor  where there are now upwards of 100 birds from the initial introduction in 2008.

Chiricahua Mountains: Just four miles from the New Mexico state line the Chiricahua can be entered through the small town of Portal. This small town in Cochise County, hosts species such as Gambel’s Quail, Lesser Nighthawk, Ladder-backed Woodpecker, Black Phoebe, Brown-crested Flycatcher, Bell’s Vireo, Bridled Titmouse, Verdin, Curve-billed Thrasher, Phainopepla, Lucy’s Warbler, Cassin’s Sparrow, and Black-throated Sparrow. The Chiricahua’s rise as one of several isolated mountain ranges found in south-eastern Arizona that are surrounded by lowland desert or grassland. They also rank high on the top list of birding destinations in the United States. Birds in the high elevations can include Band-tailed Pigeon, Greater Pewee, Cordilleran Flycatcher, Steller’s Jay, Mexican Chickadee, Pygmy Nuthatch, Olive Warbler, Grace’s Warbler, Red-faced Warbler, Yellow-eyed Junco, and Red Crossbill. Thirteen species of hummingbirds are known to occur in the Chiricahuas including Magnificent Hummingbird and Blue-throated Hummingbird, as well as Mexican species that are rarely seen in the United States. In all, there are around 200 species of birds that have been recorded from this area. Three different Towhee species include Canyon,  Spotted and Green-tailed Towhee, as well as sought after species such as Elegant Trogon, Montezuma Quail, Whiskered Screech-Owl, Acorn Woodpecker, Arizona Woodpecker, Sulphur-bellied Flycatcher, Hutton’s Vireo, Mexican Jay, and Painted Redstart.