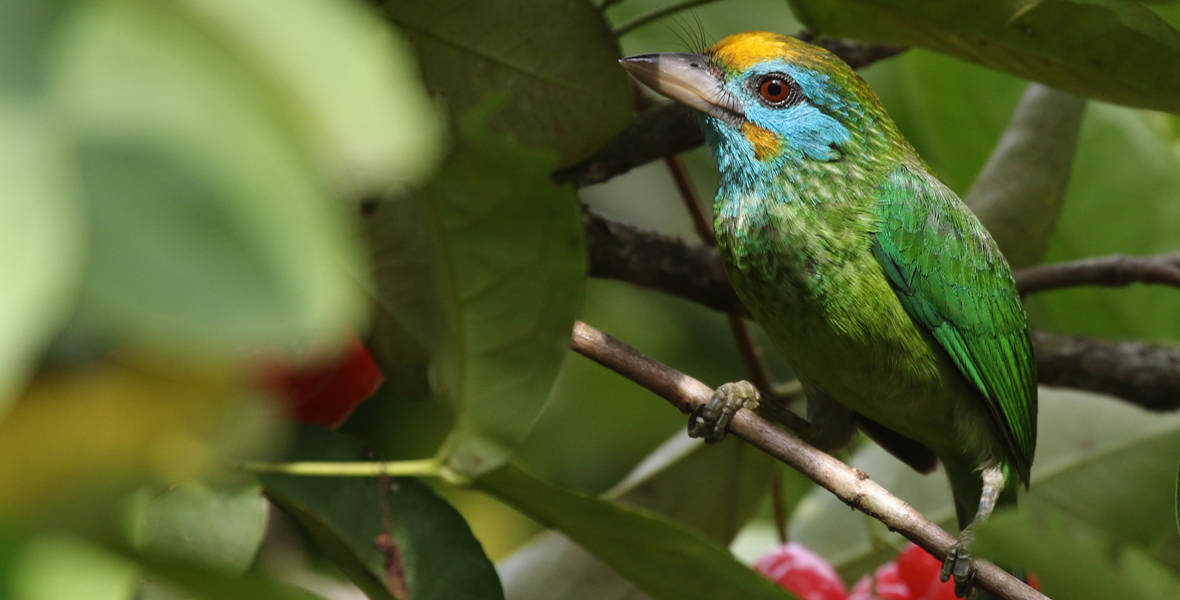 is without a doubt is one of the most pleasurable Birdwatching and Game viewing destinations in Asia. This Island nation boosts some spectacular scenery, characterised by tea plantations and forest patches, and thankfully is lucky to still have some large protected National parks that are teaming with wildlife. These attractions coupled with an amazing culture and history make Sri Lanka a Wildlife watchers paradise.

Hotspots & Wildlife:
Sinharaja Forest Reserve: Located in the South west of the country, Sinharaja Forest Reserve is the last viable area of primary tropical forest and is considered the most important area for wildlife in the country. More than 60% of the trees are endemic with many of them considered rare. For Birdwatchers this a must visit location, the area is home to 29 of the 33 endemics (87%) that live on the Island, including the incredible Serendib Scops Owl (Otus thilohoffmanni) that was only described to Science in 2004. Because of the geographical location of the reserve, there are both highland and lowland forest meaning that Sinharaja is home to around 282 species out of the 499 (56%) that have been recorded on the Island. Often when birding this humid forest you will come across mixed flocks of birds that could include the endemic Ashy-headed Laughingthrush, Red-faced Malkoha and Crimson-backed Flameback. When visiting the park you have to be accompanied by a local ranger, they often know where to look for some of the more challenging species like the Sri Lanka Thrush and Sri Lanka Frogmouth. Not only are there some great birds but the forest is also home to a large percentage of the Mammals, Butterflies, Odonata and Herps the country has to offer, many of which are also endemic to Sri Lanka.
Yala National Park: is the most visited and second largest national park in Sri Lanka, bordering the Indian Ocean. The park has been split into 5 sections, 2 of which are open to the public. The park covers 979 square km and is 300km from the capital Colombo. Yala was designated as a wildlife sanctuary in 1900, and along with Wilpattu was one of the first two national parks in Sri Lanka. Yala is best known for its variety of Mammals, and is considered a very important conservation area for Sri Lankan Elephant, Leopard and Sloth Bear. The National park has a variety of ecosystems ranging from Monsoon forest to freshwater and marine wetlands and is one of the 70 important bird areas (IBAs) in Sri Lanka. The number of Mammals recorded in the park is 44, and Yala is famous for having one of the highest Leopard densities in the World. This park has recorded 215 bird species of which 6 are endemic. Yala is also famous for its waterfowl, with around 90 species having been recorded, half of which are migratory.

Nuwara Eliya: is located in the central highlands of the country, covered in lush montane grasslands and cloud forest. At an altitude of 1,800 metres (5,905 feet), it is considered to be the most important area for tea production in Sri Lanka. Because of the different habitat and cooler climate, Nuwara Eliya has a wide range of species that are endemic to this region and can be seen nowhere else in Sri Lanka. For Birdwatchers there are some key species to look for like the Sri Lanka Whistling Thrush, Sri Lanka Bush Warbler, Yellow-eared Bulbul, Sri Lanka Wood Pigeon and the Dull-blue Flycatcher. The UNESCO Heritage site, Horton Plains National park is one of the popular attractions in the region as thousands of tourists make the trip there every year, the 6 highland endemic species of Bird can all be seen in the park. Horton Plains is also a great area to look for some mammals, the large Sambar deer can often be seen grazing on the lush vegetation. The forests in the park are also home to the endemic Red Slender Loris, one of the most endangered primates in the World. 6 endemic reptiles live in the park, the highlight being the rare Rhino-horned Lizard. Another great area to visit in Nuwara Eliya is Victoria Park, this is one of the country’s most attractive and best maintained town parks. A stroll around the park could produce a number of the highland speciality Birds like Kashmir Flycatcher, Pied Thrush and the elusive Indian Pitta.