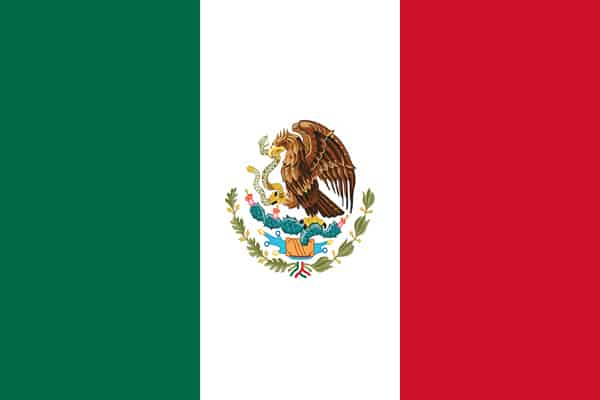 is bordered to the north by the United States and by both Guatemala and Belize to the south, Mexico covers an area of 1,972,550 km2 (761,606 sq mi) which makes it the world’s 13th largest country. It is one of the world’s most biologically diverse countries with habitats ranging from coastal sand dunes, mangroves, jungle, cloud and rain-forests, savanna, desert and high mountains. These mountains crossing from north to south are an extension of the Rocky Mountains from northern North America, and known here in Mexico as Sierra Madre Oriental and Sierra Madre Occidental. There are 34 biosphere reserves and 67 national parks as well as numerous smaller reserves and 116 protected areas which hold more species of birds than the whole of the USA and Canada combined.
In fact Mexico has 1,124 different species of birds, including 112 endemics. There are around 450 different mammals, 707 known species of reptile and more than 30,000 species of plants. If that’s not enough then every year millions of Monarch butterflies migrate from Canada and the United States to their wintering grounds in the fir forests of Mexico’s Central Highlands, an incredible journey of 3,000 miles. The island of Cozumel offers some of Mexico’s finest coral reefs, ideal for snorkelling and diving, while both the Caribbean and Pacific coats attract more than 100 Whale Sharks, and growing numbers of Grey Whales adding to the diversity of wildlife and charm of Mexico.

Hotspots & Wildlife:
Baja California: Baja California is located at the north-west corner of Mexico, surrounded by the Pacific Ocean on one side and the Gulf of California or Sea of Cortez to the other. The peninsula is approximately 774 miles (1,247 km) from Mexicali, Baja California in the north to Cabo San Lucas, Baja California Sur in the south. At its narrowest point it is about 25 miles wide and at its widest nearly 200 miles. Baja is distinctly and refreshingly Mexican even though it has a close proximity to the USA. The seas around Baja are incredibly rich in nutrients and as such they attract a great diversity of marine-life. From incredibly friendly Gray Whales to Humpback and Long-finned Pilot Whales, and sometimes Blue Whale or Orca, it’s no wonder the famous Jacques Cousteau named it “The Mexican Galapagos Islands” and the Sea of Cortez “The largest living aquarium of the world”. Another great attraction is the huge Whale Sharks that use the bay as a nursery and because of their docile manner have become a firm favourite with tourists. Most of the peninsula is desert and xeric shrub, and support several special birds such as Grey Thrasher, Xantus’s Hummingbird, and Belding’s Yellowthroat.

Yucatan: The Yucatan Peninsula in south eastern Mexico, separates the Caribbean Sea from the Gulf of Mexico. Attracting many visitors for its sandy beaches it is also the central location of the Mayan Civilization and has many famous archaeological sites such as Chichen Itza, Uxmal, and Coba. For the birdwatcher the Yucatan is home to nearly a dozen regional endemics (including four that are found only on Cozumel Island) and a large number of other interesting tropical species and water birds generally found much further south. Some of these include Cozumel Emerald, Cozumel Vireo, Cozumel Wren, Yucatan Flycatcher, Yucatan Bobwhite, Yucatan Vireo Yellow-backed Oriole, Yucatan Jay, Green Jay, Mexican Sheartail, Black Catbird, Ocellated Turkey and Rose-throated Tanager. Flocks of American Flamingos are always an attraction, along with numerous other shorebirds and waterbirds. The coastal waters off Yucatan support part of the Mesoamerican Barrier Reef system home to over 500 species of fish, plus 4 types of Turtle, West Indian Manatee and the impressive and gentle Whale Shark. On land there are 125 species of mammal, including 5 species of cat and the near-endemic Yucatan Squirrel. Cozumel island off the eastern coast of the Peninsula, opposite Playa del Carmen offers its own unique wildlife with several endemic species of birds, mammals, reptiles and even fish.

Oaxaca: The southern Mexican state of Oaxaca lies at the western edge of the Isthmus of Tehuantepec, the narrowest part of the North American continent, and Mexico’s 5th largest state. Here is the convergence point for several major bird migration routes: the Pacific, Central, and Mississippi flyways, and each year millions of birds from north and south America pass through. Habitats here include rugged Pacific beaches, humid oak and pine forests, Mexico’s largest cloud forest, arid valleys and the tropical lowlands. There are 10 different types of Pine found in the mountains of Oaxaca, as well as Mexico’s national tree, the Montezuma Cypress. More than 700 species of birds have been recorded within Oaxaca’s borders, including 40 Mexican endemics. Three that are found only in this state are the Oaxaca Sparrow, Oaxaca Hummingbird and Dwarf Jay. Other birds of special interest include Bridled Sparrow, Ocellated Thrasher, Gray-breasted Woodpecker, Boucard’s Wren, Orange-breasted Bunting, Citreoline Trogon, Red Warbler, Mountain Trogon and White-throated Towhee. Among the many mammal species are Puma and Margay, Ocelot, Northern Tamandua, Central American Spider Monkey, Gray Fox, White-nosed Coati and the elusive Ringtail. The whole area is also very rich in reptiles, amphibians and hundreds of species of butterfly.
For accommodations and lodges throughout Mexico – Click here>