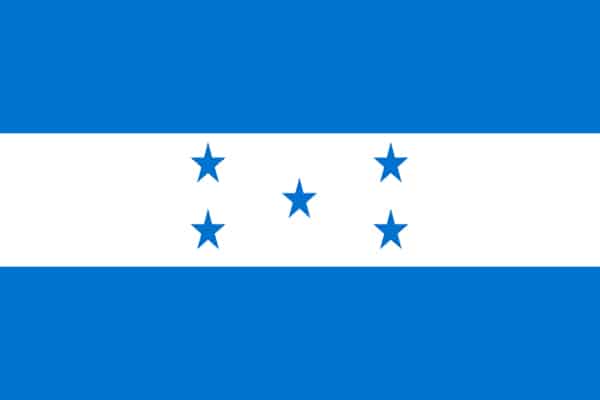 is bordered to the west by Guatemala, to the southeast by Nicaragua and to the southwest by El Salvador and it is the second largest country in Central America, following Nicaragua. Honduras is rich in good natural habitats including rainforests, and cloud-forests which rise up to nearly 3,000 metres (9,800 feet). And then there is the ‘Bay Islands’ in the Caribbean Sea where both Roatan and Utila are part of the Mesoamerican Barrier Reef System and offer some of the best marine life in the warm tropical waters. With excellent water visibility this is a hotspot for scuba diving and snorkelling with a stunning array of corals, over 500 species of fish, turtles, sharks, dolphins, Manta Rays, the incredible Whale Shark and over 1,000 West Indian Manatees. Big animals are not very numerous in the country although 110 species of mammal seems high, half of these are bats. Reptiles are very well represented with 264 species presently known, of which 59 species are endemic. There are also 137 species of amphibians  which include frogs, toads, salamanders, and caecilians, and 52 species of these are endemic. Among the 785 bird species which include 20 species of hummingbird is the country’s only endemic the Honduran Emerald.

Pico Bonito National Park: Located in the northern area of Honduras this national park was established in 1987 and covers an area of 564.30 square km, stretching from sea level up to 2,378m. It is part of the Mesoamerican Biological Corridor, a natural land bridge that extends from North America to South America and plays a vital part in bird migration which in turn helps protect many species of threatened and endangered wildlife. The park offers incredible landscapes, pristine rainforest, rugged mountain ranges, waterfalls and crystal clear rivers. Much of the park is unexplored and the wildlife undisturbed, resulting in rarely seen species such as Jaguar, Mountain Lion, Ocelot, and Armadillo, with more easily seen creatures such as howler and spider monkeys, numerous reptiles, amphibians and butterflies. Boasting over 450 species of birds it is fabulous area to search for species such as Slaty-breasted Tinamou, Keel-billed Motmot, Lovely Cotinga, Tody Motmot, Speckled Mourner, Grey-headed Piprites, Northern Royal Flycatcher, Green Shrike-vireo, Black-throated Shrike-tanager, Chestnut-coloured Woodpecker & Great Curassow. Raptors and night birds include White Hawk, Black Hawk-eagle, Ornate and Black-and-white Hawk-eagles plus Great Potoo and Middle American Screech Owl. Over 16 species of hummingbirds that are attracted to flowering trees and bushes include Blue-throated Sapphire, Violet Sabrewing, Purple-crowned Fairy, Stripe-tailed Hummingbird, White-bellied Emerald, Green-breasted Mango , Brown Violet-ear and White-necked Jacobin.

Lake Yojoa: This is by far the only natural freshwater lake in Honduras and has a coverage of around 80 square kilometres of water. With extensive marshes along the shoreline and surrounded by tropical forest and the forested mountains of Santa Barbara and Cerro Azul Meambar it is home to over 500 species of birds. The lake was formed by a volcanic depression and beside being a wonderful spot for wildlife it also supports a thriving sport fishing industry, with Bass the most often caught species. One area near the Los Naranjos Ecological and Archaeological Park, has several kilometres of elevated boardwalks that stretch across the lake’s wetlands. With luck you could see Neotropical Otter, and birds such as kingfishers, herons, Black-bellied Whistling Duck, Fulvous Whistling Duck, flocks of Blue-winged Teal, and skulking Ruddy and Yellow-breasted Crakes. The whole area surrounding this lake is high in biodiversity and amazingly holds around 60% of Honduras’ bird species. From Snail Kites, to the incredible Resplendent Quetzal, Blue-throated Motmot, Banded Wren, Northern Royal, Flycatcher, Cinnamon-bellied Flowerpiercer, Prevost’s Ground Sparrow, Black-throated Trogon and the only endemic bird in the country the Honduran Emerald. The area also produces some of the finest coffee, cacao anywhere in Central America.

Copán: known as the “Paris of the Mayan World ” the Copan Ruinas archaeological site is one of the most visited sites in Honduras. Aside from these fantastic ruins and hot springs the area is easily visited from the small colonial town of Copán Ruinas, and close to the Guatemalan border and is a haven for wildlife. The town and site lie in a fertile valley and support habitats such as dry thorn scrub, upland pine and oak forest, open fields and lowland rainforest. Around 400 species of birds have been seen in the general Copán area, and include such delights as Scarlet Macaw, Bushy-crested Jay, White-throated Magpie Jay, Keel-Billed Toucan, Black Hawk-Eagle, White-breasted Hawk, Brown-backed Solitaire, Blue-crowned Chlorophonia, Prevost’s Ground Sparrow, Olive warbler and the smart looking Sparkling-tailed Woodstar. Several very productive sites near to the ruins include La Laguna Road and Las Sepulturas, which although close to the main Copán ruins is far less visited. Other birds to be found here include Lesser Ground Cuckoo, Elegant Trogon, Lesser Roadrunner, Red-throated Parakeets, Elegant Euphonia, Emerald Toucanet, Golden-olive Woodpecker and Yellow-throated Brush-finch. All in all Copán can combine intriguing and spectacular archaeology with excellent tropical birding.