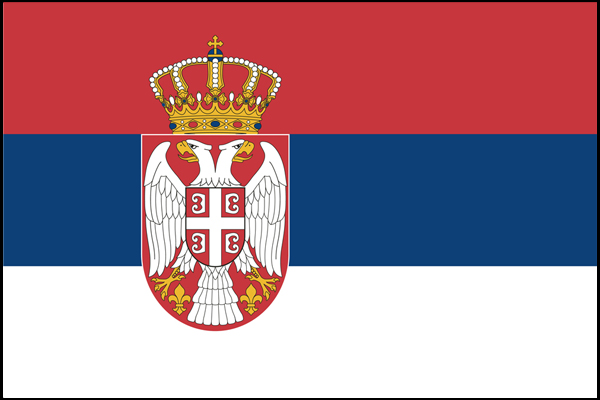 is a landlocked country of Serbia, formerly part of Yugoslavia lies between Central and Southern Europe, and is located in the Balkan peninsula and along the Pannonian Plain. Dominated by the Danube River most other rivers drain into this, the second largest river in Europe before spilling out into the Black Sea. With a great diversity of habitats including an abundance of mountains and rivers its no surprise that Serbia has a very rich and varied fauna. In fact nearly 80% of Europe’s bird species have been recorded here. Aside from many wonderful birds including breeding Rollers, Bee-eaters, Eastern Imperial Eagle, Saker Falcon, Great Bustard, Pygmy Cormorant, Ural Owl and Semi-collared Flycatcher the wonderful habitats also provide a home to Grey Wolves, European Lynx, Brown Bear, Golden Jackal, Wildcat, Otter and many smaller mammals such as Steppe Mouse. There are also around 30 species of Bat in the country as well as huge variety of Butterflies, Dragonflies, Reptiles, and interesting flora. With better infrastructure than many of the more well known surrounding countries and superb cuisine, extraordinarily friendly people this is a country to put on your wildlife- must visit list!

Hotspots & Wildlife:
Kikinda: The small town of Kikinda just 138km north of Serbia’s capital Belgrade has in recent years become well known as the World Capital for owls! In particular the Long-eared Owl who’s number can be as great as 700 individuals in and around the town square. Certain trees may hold over 100 birds with many sat right out in the open allowing thousands of visitors to enjoy this spectacle. The owls are most plentiful between November to February and have featured in ancient history back hundreds of years. Other nearby towns also hold winter roosting Long-eared Owls occasionally joined by a Barn Owl or Short-eared Owl. So with Kikinda as the capital of the owls the whole area can host up to an amazing 8,000 owls. Trees and local parks around town also hold Little Owls and Syrian and Green Woodpecker, Black Redstart and in summer breeding Golden Oriole, Serin and Common Nightingale. Winter is the optimal time to visit Kikinda and other species found on the outskirts of this beautiful town include large flocks of Common Crane, Greater White-fronted Geese and the one or two Great Grey Shrikes. With excellent hotels, superb food and wines this little town deserves the reputation it has gained as a wildlife friendly place to visit.

Belgrade area: The capital city of Belgrade is a great introduction to the wildlife of this fascinating country. Set on the confluence of the Sava and the Danube Rivers winter wildlife abounds. Interesting bird species on the rivers include good numbers of Pygmy Cormorant alongside the larger Great Cormorants, the rare Ferruginous Duck, Greater Scaup, Velvet Scoter, Long-tailed Duck, Common Merganser, Red-breasted Merganser, and the gorgeous looking Smew. The huge White-tailed Eagle is not unusual to see nowadays and rarer birds such as Red-throated and Black-throated Diver can also occur. Around the small town parks and places like Belgrade Fortress you can find Red Squirrel, Hawfinch and several species of woodpecker including Syrian, Green, Great-spotted and sometimes Black. Just a few minutes drive from the city are several fish farms that act as a magnet to many migrant, wintering and breeding birds. White-tailed Eagles can be found along with thousands of Eurasian Teal, Greater White-fronted Geese and Common Cranes. Both Bearded Reedling and Penduline Tit are around all year, while Little Owls, Pygmy Cormorants, Great Bittern and Kingfisher can also be found. These fish ponds are worth visiting at any time of year as many scarce and rare migrants can turn up and if you are lucky you could even spot a Wild Boar.

Djerdap National Park: Djerdap National Park represents the largest national park in Serbia and extends over an area of 63,608 hectares. Situated in north-east Serbia along the border with Romania the park is roughly 6 km in width by some 100 km in length. It covers a section of the river Danube gorge and habitats include deciduous forest and scrub, grassland, streams and limestone cliffs. The most impressive natural feature is the Djerdap gorge which represents the longest and the largest gorge in Europe.
With the wide range of habitats its no wonder the park is a haven for all sorts of wildlife. There are around 55 species of mammal including Eurasian Lynx, European Wildcat, Brown Bear, Grey Wolf, Golden Jackal, Wild Boar, Otter and numerous bat species. With over 270 different types of birds the park is a regognised (IBA) Important Bird Area and holds such important species as Pygmy Cormorant, Lesser Spotted, White-tailed and Golden Eagles, Black Stork, Ural Owl, Eurasian Eagle-owl, Rock Partridge, Hazel Grouse, Corncrake, Sombre Tit, Ortolan Bunting and various woodpeckers. Around 50 fish species are present in the Danube, while amphibians include 13 species and reptiles an amazing 14 species of which 9 are strictly protected. If this wasn’t enough to entice any naturalist you can also add over 100 species of butterfly and huge variety of plants.