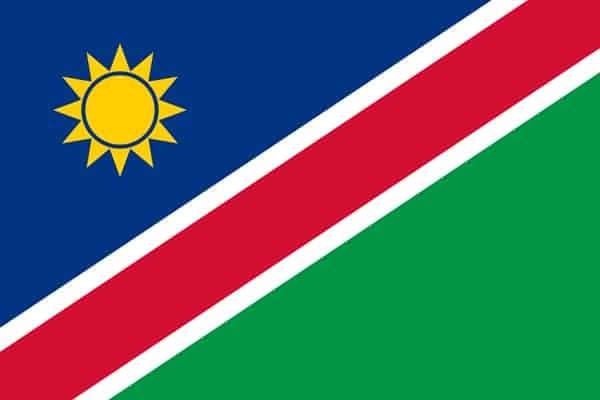 is a wild and spectacular country with its towering sand dunes, deep canyons, high mountains, shimmering desert and dry bush, has all the ingredients for a great wildlife destination. The stunning scenery of the iconic bright red sand dunes of the Namib Desert are best appreciated at dusk or dawn when the low sun throws up those famous curved shadows. This desert hosts many interesting species including the localised and endemic Dune Lark, plus Mountain Zebra and the strange Welwitschia plant, a type of dwarf pine that grows to over 1,500 years old. The Skeleton coast offers superb coastal birding and boat trips into the Atlantic allow opportunities for close-up seabirds and mammals such as Heaviside’s and Dusky Dolphins, as well as Cape Fur Seals. Walvis Bay and the small town of Swakopmund are great places to see Damara Terns, pelicans, flamingos and tens of thousands of shorebirds and waterfowl concentrated in pools and wetlands. And then there is the famous Etosha National Park and Waterberg National Park, both of which are outstanding for the sheer numbers and variety of mammals, birds and reptiles.

Waterberg National Park: Waterberg National Park is set on a plateau where a table mountain rises high above the plains of the Kalahari in Eastern Namibia and stretches about 50 km long, and up to 16 km wide. The plateau was declared a National Monument in 1956 and surrounded by lush vegetation, this very attractive, scenic area offers great opportunities for seeing several of Namibia’s near-endemic and sought after species. Because of the park’s remoteness, several endangered species have been reintroduced in order to help protect them, and these include both Black and White Rhinoceros, Roan and Sable Antelope. Birdlife includes species such as Kori Bustard, Hartlaub’s Francolin, Rüppell’s Parrot, Rosy-faced Lovebird, Monteiro’s Hornbill, Cape Vulture, Rockrunner, White-backed Mousebird and reliably Bradfield’s Swift. The mammals here are highly diverse with Baboons living on the rocks, along with Klipspringer, while dense bush hides Damara Dik-Dik, Eland and Kudu, and the plains are home to Giraffe, Oryx, Red Hartebeest, Impala, Blue Wildebeest, Zebra and Springbok. Of course this means there are predators such as Leopard, Cheetah, Hyenas and Jackals.

Etosha National Park: Set in northwest Namibia, this park gets its name from the large Etosha Salt Pan which can even be seen from space. Mostly dry and arid with scattered areas of thorny scrub, and seasonal waterholes, the park is home to hundreds of species of mammals, birds and reptiles. The Etosha Pan itself covers 4,760 km2 (1,840 sq mi)) and represents 23% of the total area of the National Park. Bordered on the south by the Dolomite Hills, this densely vegetated area is good for predators as well as the rare Mountain Zebra. Surrounding the ‘Pan’ are savanna woodlands, thorn scrub, acacia’s and other small trees that protect many of the creatures that live here. From November to March is the rainy season and this is when the ‘Pan’ comes alive with thousands of flamingos and other birds and mammals. Large Elephants can be found, and this was one of the last strongholds of the Black Rhino. Ostrich’s and Kori and Ludwig’s Bustards occur as well as several hundred other species of birds.

Walvis Bay: Walvis Bay is Namibia’s largest commercial sea port, yet this area is rich in wildlife and a ‘must visit’ wildlife hotspot for travelling naturalists and birdwatchers. The sea’s off Walvis Bay is rich in nutrients and plays host to many marine animals, fish and birds. In fact the name Walvis comes from the Afrikaan word for Whale and so the name “Whale Bay” actually refers to the Southern Right whales that can be found here. Cape Fur Seals are plentiful and a short boat trip has possibilities of Heaviside’s and Dusky Dolphins, plus Ocean Sunfish, maybe Leatherback Turtle and close up Wilson’s Petrels, Hartlaub’s Gull, Cape Cormorant, African Penguin and the rare Damara Tern. Ponds, lagoons, sand dunes and coastal scrub also play an important role with these habitats attracting numerous birds and other wildlife. The wetlands hold huge numbers of migrants during the right season including Pied Avocets, Curlew Sandpipers, Little Stint and both Lesser and Greater Flamingos in their thousands.  Resident birds such as Chestnut-banded Plovers, Caspian Terns, Damara Terns, Cape Teal and Great White Pelicans can all be found while a short trip inland can reveal such exciting species as the endemic Dune Lark, or maybe Rock Kestrel or Pale Chanting Goshawk.