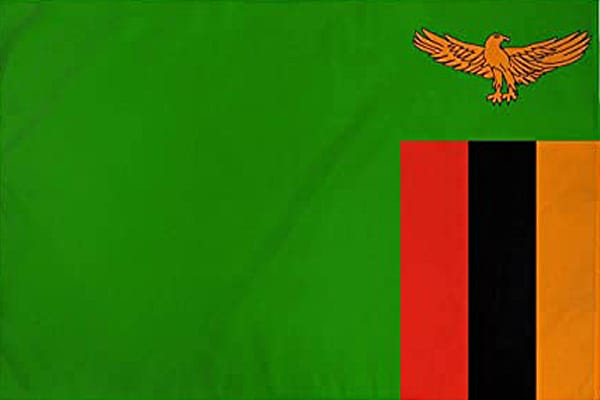 is a landlocked country in Southern-Central Africa and its neighbours are the Democratic Republic of the Congo to the north, Tanzania to the north-east, Malawi to the east, Mozambique to the southeast, Zimbabwe and Botswana to the south, Namibia to the southwest, and Angola to the west. Once known as Northern Rhodesia it was renamed Zambia in 1964 and the name derived from the Zambezi river. The famous Victoria Falls form the border between Zambia and Zimbabwe and drop 359ft, forming a white curtain along its 5,500 ft width. These falls offer one of the greatest natural attractions in Africa and one of the most spectacular waterfalls in the world. Although a renowned tourist attraction it is surprisingly rich in wildlife. The rest of Zambia with its tropical climate, high plateaus, rolling hills and mountains, dissected by river valleys, has a rich and varied habitat. This is a very safe and picturesque country with plenty of big mammals and an impressive bird list enticing wildlife watchers from all over the world. Bird wise it has just one endemic, the Chaplin’s Barbet, with five others considered near-endemics Swynnerton’s Robin, Boulder Chat, Chirinda Apalis, Roberts’s Warbler and the Black-cheeked Lovebird

Victoria Falls: The world-famous Victoria Falls a UNESCO World Heritage site has been portrayed by many films, documentaries and literature from all over the world. Named in honour of Queen Victoria by Scottish missionary and explorer David Livingstone, the Falls are also known by the local name, Mosi-oa-Tunya—”the smoke that thunders”. These spectacular falls are of course a major tourist attractions with dense clouds of water vapour rising up from the deep gorge below. There are nearby lodges that are close enough to visit yet take you away from the hustle and bustle of tourist. The Taita Falcon used to be easy to see but nowadays has become much less visible as they have moved further down the gorge. The endemic pale race of African Black Swift (hollidayi) are found only here, alongside commoner species such as Rock Martins, Red-chested Cuckoo, and Red-winged Starlings. Further searching may reveal Chacma Baboons on the rock face and in the scrubby hillside its possible to see Schalow’s Turaco, Trumpeter Hornbill, White-browed and Bearded Scrub Robins, Violet-backed Starling, Black-collared Barbet and small groups of range restricted Natal Spurfowl.

South Luangwa National Park: South Luangwa National Park is Zambia’s foremost wildlife reserve and is bordered by the Luangwa River. Covering some 9,000 square kilometres it is considered by many to be one of the greatest wildlife sanctuaries in the world. The Luangwa River, and its oxbow lagoons are the life force of this park, these wetlands teem with wildlife. Hippo’s and crocodiles are plentiful and over 60 different animal species and over 400 different bird species call this home. The sheer abundance of wildlife and several luxurious lodges from which you can base your stay, make this a naturalists dream. By staying here you are also able to go on organised night drives in search of nocturnal species, something many parks in Africa do not allow. Leopards can easily be spot lit at night and nightjars and owls and even hunting Lions can be sought. Wildebeest, Giraffe and Zebra roam the vast grasslands and among the many special birds are Pel’s Fishing Owl, Southern Carmine Bee-eaters, African Pitta, Anchieta’s Barbet, Anchieta’s Sunbird, Rock Pratincole, African Finfoot, Blue Quail, Fülleborn’s Longclaw to name a few.

Kafue National Park: Situated in the centre of western Zambia, Kafue National Park is the oldest and largest of Zambia’s national parks, and covering 22,400 km2, it was established in the 1950’s by the legendary Norman Carr. Just a two hours drive from Livingstone it is relatively unknown yet holds a fantastic variety of wildlife thanks to its huge size and mostly unexplored and untouched variety of habitats. New investment in the area, with better infrastructure, well-graded roads and airstrips means a valuable increase in tourism and especially eco-tourism. With an increased level of protection offered by the Zambia Wildlife Authority, Kafue is gaining in reputation as a prime place to see some of the more restricted and rarer species. Packs of Wild Dogs can be found on both sides of the Kafue River, Cheetah’s are not uncommon and things like pangolin, Bushpig, Spring Hare, Serval, Caracal, Wild Cat, Oribi, Roan and even Aardvark can be seen.